The Haqqani Foundation endeavors to spread the Sufi teachings of the brotherhood of mankind and the Unity of belief in God that is present in all religions and spiritual paths.
Its efforts are directed at bringing the diverse spectrum of religions and spiritual paths into harmony and concord, in recognition of mankind's responsibility as caretaker of this fragile planet and of one another.

our inspiration to serve 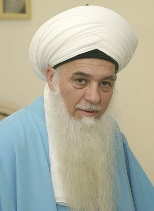 Chairman of the Islamic Supreme Council of America

Shaykh Kabbani advocates an understanding of Islam fundamentally based on peace, tolerance, respect and love and is an outspoken critic of extremism. He works closely with the governments and people of Muslim nations around the world to restore traditional moderate Islamic practices and prevent the increase of religious radicalism. He has supported peace initiatives in the Middle East, Bosnia, Kashmir, Afghanistan and Kosovo.