The Haqqani Foundation endeavors to spread the Sufi teachings of the brotherhood of mankind and the Unity of belief in God that is present in all religions and spiritual paths.
Its efforts are directed at bringing the diverse spectrum of religions and spiritual paths into harmony and concord, in recognition of mankind's responsibility as caretaker of this fragile planet and of one another. 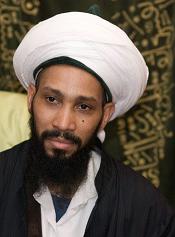 Imam Omar Koné is a lecturer and Muslim congregation leader at the Sufi Center (Masjid al-Iman) in Montreal, and serves as a regional director of the worldwide Haqqani Foundation. After graduating in microelectronics, he received his MBA with a specialization in technology, and has worked as an engineer for ten years. Originally from Mali, he has been very active in inter-faith dialogue throughout Montreal and regionally for a number of years. Imam Koné participated in panels organized by the Quebec School Board as a specialist on reasonable accommodation in religious matters, and later participated as a community leader in the Bouchard-Taylor hearings.

He has been invited by universities (McGill, Concordia, UQAM and the University of Montreal), schools, and CEGEPs across Montreal to lecture on issues relating to Islam, spirituality, and the Muslim world. He regularly advises public institutions (City of Montreal, Quebec Provincial Government) and Social Services of Montreal (CLSC and community) on intercultural awareness. Imam Koné has also been invited to speak on the subject of moderate mainstream Islam by Radio Canada, Le Journal de Montreal, Tele-Quebec, the Maghreb Caravan, TVA, CBC, and La Presse.